Stuffed cabbage was not a part of my childhood growing up – it’s something I sometimes heard other people talk about or maybe even tried once or twice, but it wasn’t until I married my half-Polish husband and had “Galumpkis” at his family’s house in Ohio that I realized what I’d been missing out on. A few years ago I made the traditional Polish Galumpkis recipe and swore I’d never take it on again – it was a three page long recipe that downright exhausted me. But I found myself with an abundance of cabbage recently and decided to give it a go again in my own simplified version and with bison rather than ground beef or pork.

Pastured bison (which is really the only kind of bison you can buy) is leaner and healthier than beef or pork. Pastured animals are free-range, they eat grass and graze on open pasture, which means they move around, develop healthy muscles and fat and because they’re eating what nature intended for them to eat (instead of corn and antibiotics like mass produced beef), their meat is actually healthier and contains WAY more Omega-3’s and less bad (saturated) fats.

I also substituted quinoa for rice. We generally don’t eat rice – I don’t really like it unless there’s raw fish on top of it and there’s just not a lot of nutritional value. Quinoa is a whole grain with a higher fiber content and other nutritional benefits like a particularly high dose of antioxidant phytonutrients…..and other scientific sounding things that I will refrain from diving into.

And cabbage is good for you. Obviously. If it wasn’t, nobody would eat it. 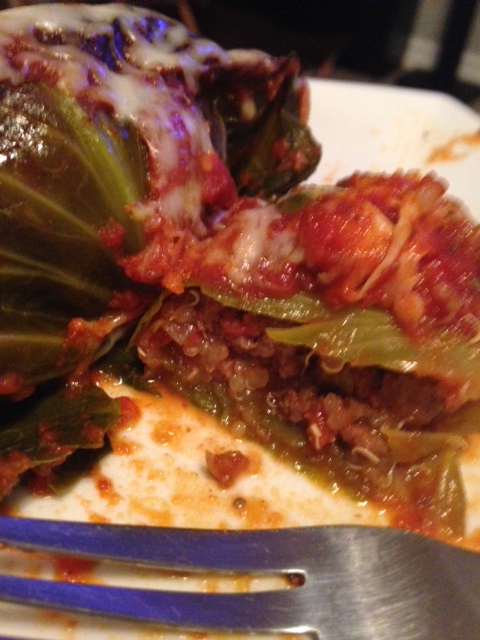 *I use a Virginia made maple syrup that is, without exaggeration, the best maple syrup in the world. It is made by two very special people, Pat and Valerie. If you can’t name the people making your syrup, then get on it (and Aunt Jemima doesn’t count). Now you can. You can purchase it through their Back Creek Farms website – they even did the work for me and tell you all about why maple syrup is actually good for you! While you’re there – check out their adorable cabin, which I have stayed in and can vouch for the fact that it’s one of the most adorable places on the planet.